After a four year wait, the new port started up operations last summer, with the arrival of the first freight train. The track is 4 km long, linking together the new port with the existing rail network. Tyréns was responsible for designing the new railway line and connecting it to the Swedish Transport Administration’s Nynäs line.

Stockholm Norvik Port is the new, modern RoRo and container terminal that has been created using the latest technology, offering a new infrastructure that is directly connected to the existing motorway and railway.

Besides designing and building a new railway line, Ports of Stockholm also built a motorway overpass for the Swedish Transport Administration and bicycle bridges for Nynäshamn Municipality. One significant challenge was ensuring that the proposed solutions met the legal and regulatory requirements, as well as the other requirements stated by each end user.

“For Tyréns, one of the greatest challenges we faced was ensuring that the boundaries between the Ports of Stockholm railway line and the Swedish Transport Administration’s main line were distinct and correct. It was no easy task, because there are different ownership boundaries for the signalling system and the track itself,” says Tomas Karström, Project Manager for the infrastructure sub-project at Ports of Stockholm.

A sustainable port with efficient, sustainable transport solution
Tyréns was responsible for Järnväg BEST, which included the track, electricity, signalling, telecommunications, ducting and GOP (the Swedish Transport Agency’s approval process). It involved designing the tender and construction documents for two execution contracts for the railway line. One was for the part within the boundaries of Ports of Stockholm and the other was for the part on Nynäsbanan where a connecting exchange was installed to connect the tracks down to Stockholm Norvik Port. We also managed the Swedish Transport Agency’s approval process to ensure that the new RoRo and container terminal was safe and approved for railway traffic.

“All of us working with the railway aspects found this to be a very exciting and unusual assignment. Designing an entirely new railway line was a lot of fun! Working with a different client than what we’re used to was interesting and we all learned so much from it all,” says Karin Fenger-Krog, Project Manager and Head of Department for Railway, Track & Land at Tyréns. 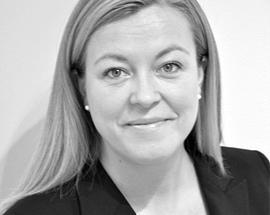