On behalf of Umeå Municipality, Tyréns has formed and designed the lighting for the wooded park, Hedlundadungen, in central Umeå. The park has a clear wooded theme, where pine trees and pinecones have inspired the choice of play equipment, colour scheme and design of details built onsite.

Tyréns' landscape architects and light designers have created, in close cooperation, a park where the lighting and light effects give an accessible and inspiring play milieu in the existing grove of pine trees. The design stage started in 2014, but Tyréns participation started in 2009. In June 2016, the park was opened and it quickly became a popular place for visitors from afar and local residents alike.

In order to create a secure, restful and inviting park environment, in accordance with the assignment, dialogues were held with the citizens and Umeå Municipality and nearby schools were involved in the creative process. The goal was to create a park with natural feeling that didn't feel too artificial as well as to provide space for play and movement as well as calm and relaxation.

The new adventure playground, which is at the centre of the park, has been designed to suit different ages and physical abilities. Here is to be found a large, more physically challenging, climbing frame and two pyramid shaped towers with high slides. There is also traditional water play and a so-called Drydeck, where children and adults can meet and share their fascination of the power of water based on their own abilities. Around the Drydeck, the terrain has been modelled into a bowl-shaped surface that is intended for sunbathing and picnics. The play park also holds nest swings, climbing frames for younger children, sandpit with rear board suitable for wheelchairs, a weather shelter, walls forming spaces, roundabouts, nursery play equipment etc. The park also includes two outdoor gyms. The gym equipment is set out adjacent to a 1 kilometre jogging circuit that has been routed between the pine trees.

The light configuration is based on the same guiding principles as the landscape design with the pine cone and forest centre stage. Several trees have been decorated with large illuminated spheres that are inspired by pine cones and have now become identity bearing for the park. Major emphasis has also been placed on making the park feel welcoming and safe at the same time, with good visual comfort. For this reason, much of the lighting has been integrated into the playground equipment to create an even and inviting light and to avoid the feeling of a theatrical backdrop. The project has been strengthened by a clear concept for the visual design and close collaboration between landscape architecture, light design and construction. 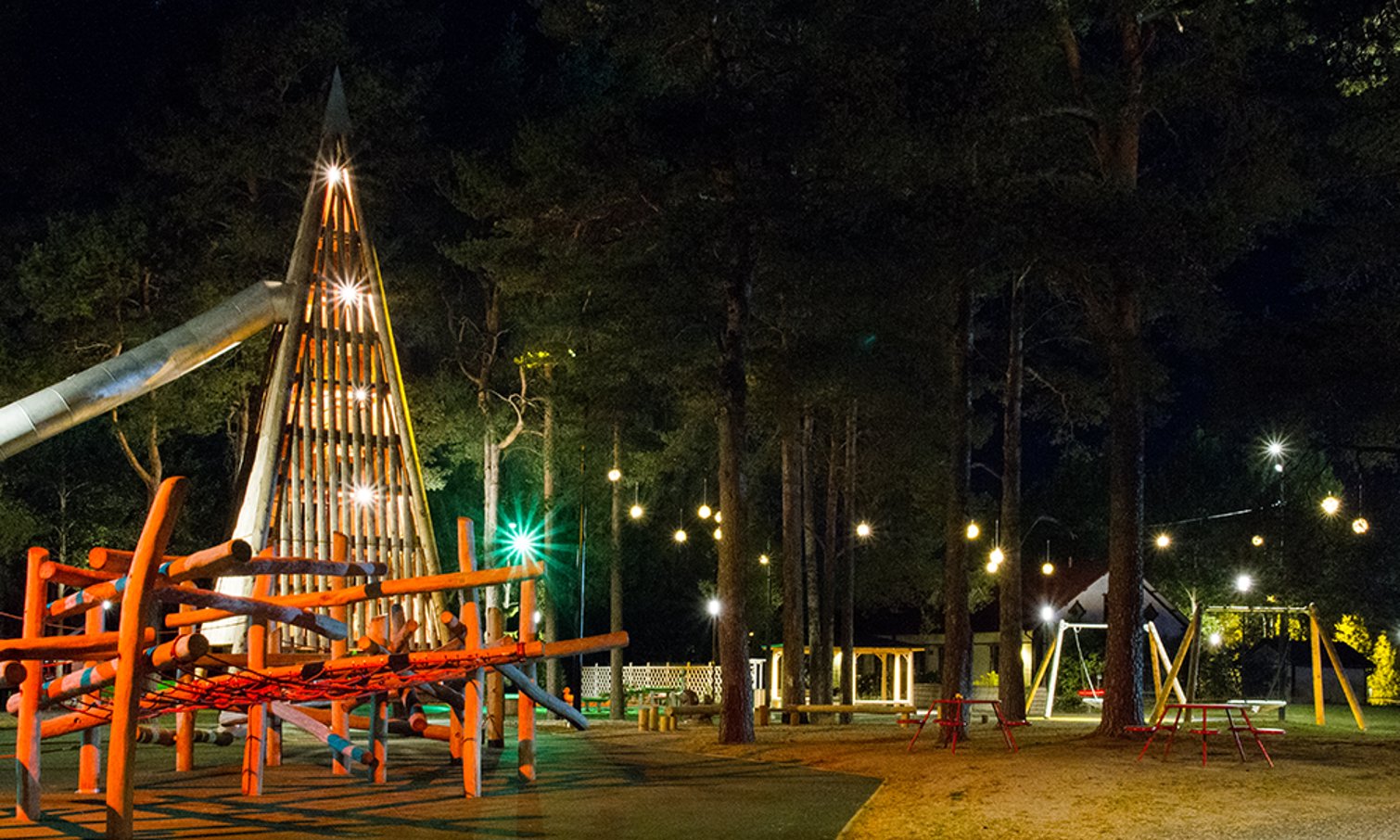